Solution for Vibration in Crushing Structure

The primary crusher structure at an iron ore facility was exhibiting consistent, unacceptably high vibration levels during operation. The primary crusher operated at approximately 4Hz and was fed from a vibratory feeder operating at approximately 1000tph, at a frequency of 800-1000rpm. Deacon Engineers were contracted to come with a solution and necessary modifications to reduce structural vibrations.

Deacon Engineers co-ordinated the measurement of the structural vibration data at 10 locations of interest. Data was collected over the operating range and three frequency bands of particular concern were identified. Measurements confirmed that vibrations velocities exceeded the short and long term vibration limits. 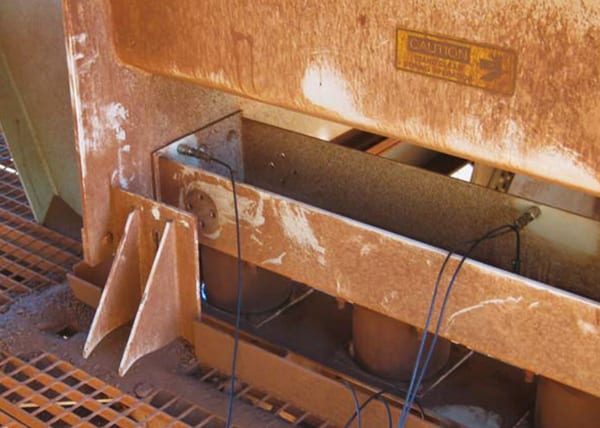 Strand7 finite element software was used to generate a 3D model with beam and plate elements. The natural frequencies were calculated for a suitable number of modes, and the modal response of the structure was reviewed across the operating range. The calculated velocities at the points of interest were then compared against the measured velocities and results. The mass in the ROM bin, inherent damping and stiffness of various connections were adjusted until a satisfactory level of correlation between the measured data and calculated data was obtained.

Since there were a number of higher frequency modes with substantial mass participation a sig- nificant number of natural frequencies were required to calculate the modal response. The mod- el required calibration of the structural damping factors to adjust the amplitude of the calculated response to be closer to the measured response. Modelling confirmed the presence of a number of full structure vibration modes, and a number of other frequencies in the operating range which led to high localised velocities. General results showed that the structure had inadequate stiffness in a number of areas. 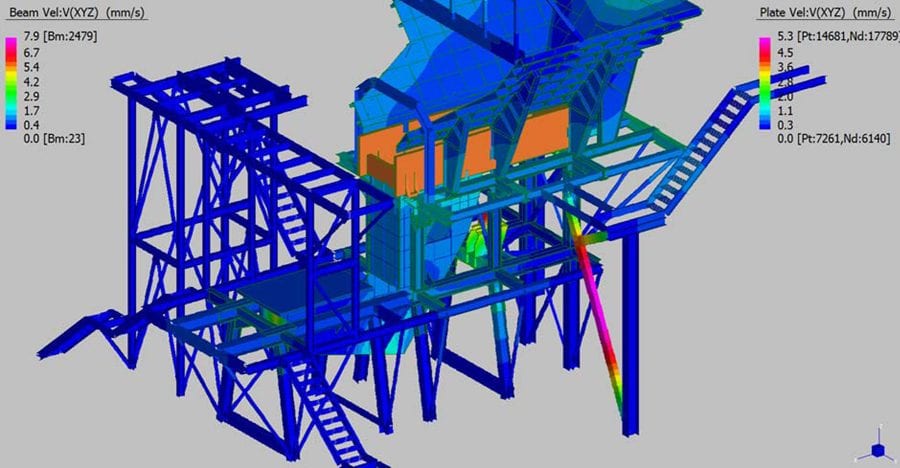 Sample Dynamic Response of the structure

To reduce the vibration levels, the model was amended through the addition of CHS bracing in side elevation, and angle bracing through the walkway in plan. The resultant peak vibrations in the main structural members for the modified structure were reduced by a factor of 4 from the unmodified structure.The options for modifications were limited as they could not impair current access to equipment and they needed to be able to be quickly installed to provide minimal downtime for operations. This was achieved to client satisfaction.

A summary report presenting the design work that was done and the proposed modifications and detail fabrication drawings were produced. The modifications to the structure were implemented at the next planned shutdown which resulted in a significant reduction in vibration levels so that the plant was operating at acceptable levels and no further vibration measurement / modifications were required.